The Ziron team were on the road in early July, sponsoring the second year of UK real time communications conference CommCon, held in beautiful countryside just north west of London.

The venue – Latimer House, near Chesham, Buckinghamshire – has a long and interesting history, but in our opinion the most intriguing part was doing World War 2, when it became the focal point of top secret activities run by MI5 and MI6. Several thousand of German prisoners of war  were held here, with the cells secretly bugged and conversations covertly recorded in an attempt to gain important intelligence. Over 100,000 transcripts survived and are held in the National Archives to this day.

With two tracks and over 40 talks across three days we haven’t got space to cover everything we saw, but here’s some highlights. All of the talks were streamed live on YouTube (in 4K – apparently a first for this kind of conference!) and are available to watch again on the CommCon channel. 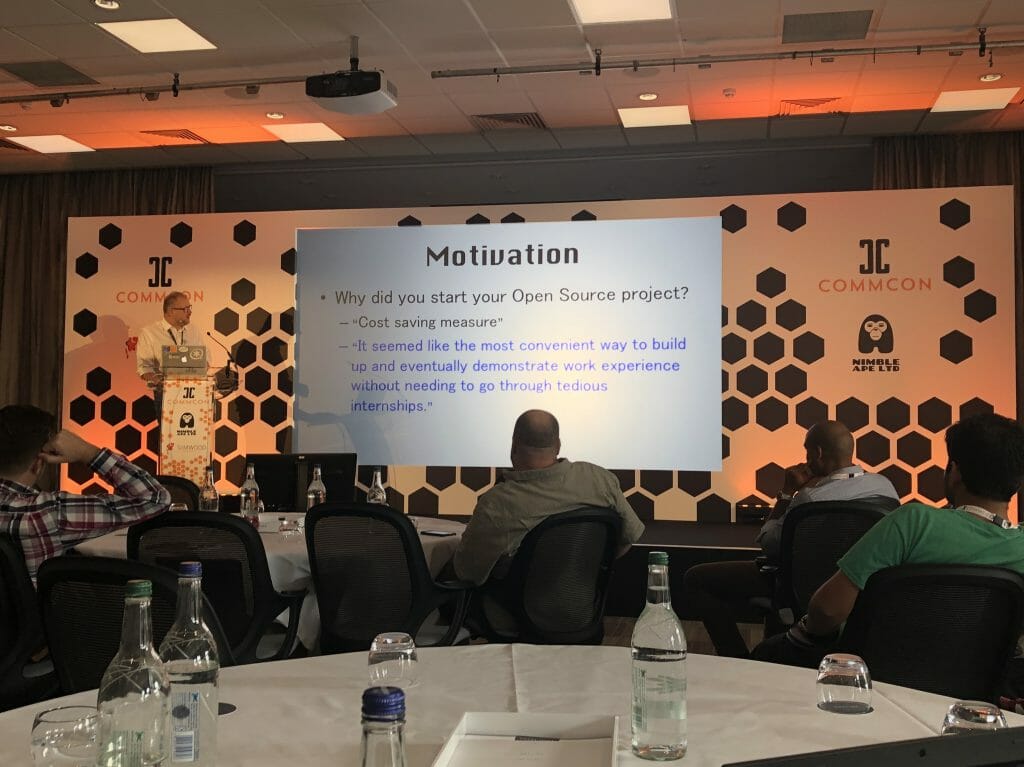 In the main room. we saw Telet Research’s James Body giving a fascinating presentation on building a 4G mobile network with open source software and relatively inexpensive hardware, based on his experiences at community mobile operator Ch4lke Mobile.

At the other end of the scale, FullRate‘s Kenn Leth Hansen spoke about their experience building a new voice platform serving over 350,000 mobile users in Denmark with open source software including FreeSWITCH and Kamailio.

Interestingly, in the Q&A at the end, Kenn said that a year ago at the beginning of the project, the aim was to use containerisation and leverage Kubernetes to orchestrate those containers – but they settled on a virtualised environment instead, using the SaltStack to manage VMs. At Ziron we operate an increasing number of services using Kubernetes and containerisation – but that’s the subject for another post in the future!

In the afternoon, two workshops took place: the first – Build your own programmable telecommunications infrastructure – with Rob Pickering, Eliza Camber, and Jason Berryman gave participants hands on experience with building voice applications using NodeJS, Drachtio and Asterisk. In the second workshop, Tim Panton from Pipe led participants through a step by step guide to building a webRTC based ‘droid and racing it around a course using a camera and a smartphone.

In the evening, the fascinating history of the CommCon venue was the subject of a talk on the Monday night by British historian Dr. Helen Fry, who entertained attendees with stories of spies, secret passages, and Hitler’s Deputy Rudolf Hess – who is reputed to have been held at Latimer in 1942. Dinner (and drinks – courtesy of Cloudonix) followed, with conversations about the days events carrying on late into the night.

Back to the present and more modern (less covert!) communications, day one kicked with a fascinating keynote from David Duffett from Let The Geek Speak entitled “Open Source: Beyond The Bottom Line”. David had used some of his connections and friendships within the open source community to understand what motivated those behind such projects, and presented his insights to the CommCon audience.

The event then split into two tracks, with a slightly smaller second venue (somewhat resembling a giant bouncy castle) on the lawn in the grounds of the venue featuring a second set of talks. 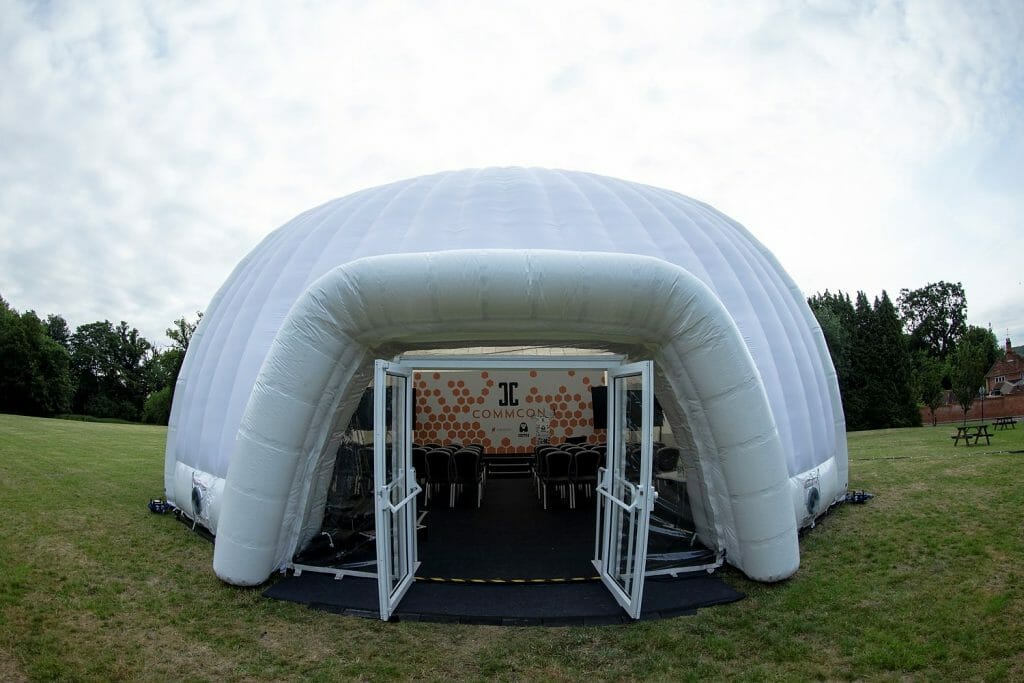 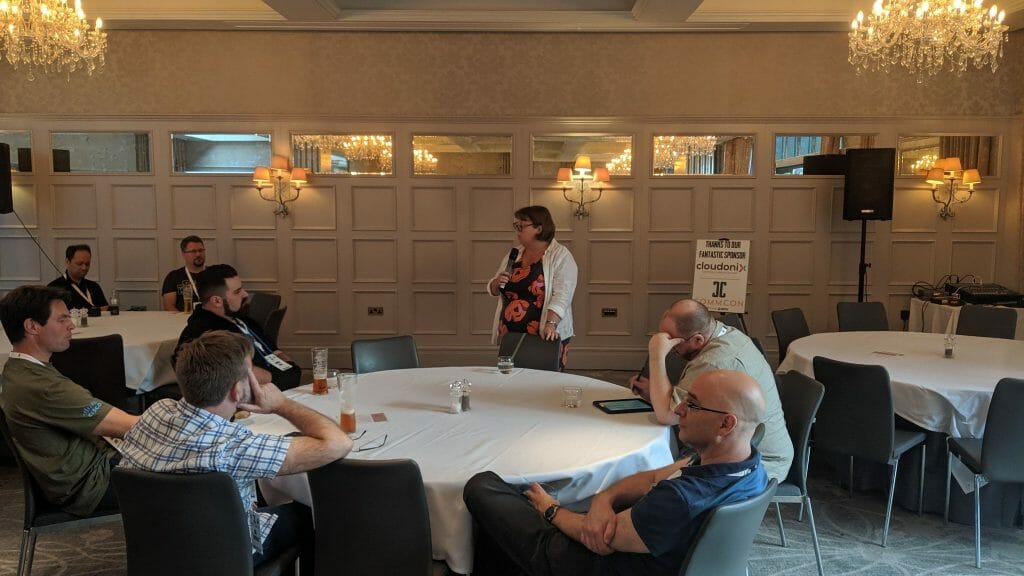 Day two began with a keynote from Magic Leap‘s Chris Matthieu entitled “Spacial Computing Changes Everything“. If you haven’t had a chance to play with Augmented Reality or the Magic Leap headset, it really is worth a go! Sadly the headset is only currently available in the US, but fortunately Chris brought one with him which was the centre of attention later in the evening.

Back to more traditional telecoms topics, Alan Percy from TelcoBridges followed up with a talk on scaling open source communications with SBCs – and why B2BUAs are important for security. Interestingly for a company traditionally associated with hardware, TelcoBridges have recently launched a free SBC called, rather originally, FreeSBC – which is 100% software based and can run on bare metal or virtualised environments. It will be interesting to see how much take-up this has amongst those using one of the popular open source solutions as their SBC.

Later on in the dome, we saw Evan McGee, CTO of SignalWire, speaking about their experiences scaling cPaaS globally with Docker and public cloud providers such as Microsoft Azure, Amazon Web Services and Digital Ocean. Interestingly, SignalWire have chosen not to use Kubernetes for orchestration – and gone for Docker Swarm. Again, a topic for another blog post!

Another interesting thing about SignalWire is their history. With the founding members and some of the main contributors to the FreeSWITCH project leading the company, they have built a global cPaaS solution in a very short space of time which is challenging the likes of more established players such as Twilio and Nexmo. It will be interesting to watch their progress over the coming months, especially given their teams pedigree and knowledge of open source telephony.

After lunch, two more hackathons took place – A Secure Mobile Communications Hackathon with and a workshop on building next-generation IVRs with DialogFlow and Drachtio. After dinner, attendees got busy with the games evening, with  the aforementioned Magic Leap headset amongst more traditional offerings such as XBox One and Playstation 4 (the latter having a PS VR headset attached).

With acquisition of Digium by Sangoma just under a year ago, the future of popular open source telephony project Asterisk is a hotly debated topic. As project lead of Asterisk, Sangoma’s Matthew Fredrickson kindly cut short his family holiday to speak to the assembled attendees on Asterisk 16, and what is coming up in later releases.

Meanwhile, in the dome, Nexmo’s Sam Machin gave a fascinating talk – and a live demonstration – about how he used the recently added WebRTC browser in the Amazon Show and Spot to build a home monitoring solution. He also gave a demonstration of using Alexa to call an Asterisk extension in his home office, which, with the recent announcement of Vodafone’s partnership with Amazon to deliver two-way calling to Echo devices, is interesting timing if you’d prefer to hack together your own solution.

Although the vast majority of the speakers at CommCon gave exceptionally interesting and well thought out presentations, we’ve all been in one of those meetings where someone has written paragraphs of information on a slide – and has proceeded to read every… single… word. In David Duffett’s talk entitled “Why Nerds Aren’t Heard: 7 ways Geeks sabotage their own presentations – and how to avoid these pitfalls” he gave some great tips on how attendees could better make presentations – including how to draw in an audience, overcome apathy, and the importance of practicing your presentation (and not just hacking a slide deck together the night before!)

Towards the end of the afternoon, the lightning talks gave speakers ten minutes to talk on a topic of their choice. Whilst you can watch all of them on YouTube, we particularly liked Rob Pickering’s talk entitled “What can I personally do to make my hiring more diverse“.

And that’s a wrap!

Although CommCon is only in its second year, we’d heard such great things from attendees of last year’s event that we decided to sponsor this great event. We certainly weren’t disappointed – the calibre of speakers was top notch, with some very diverse topics in a relaxed atmosphere.

Unlike most other conferences, the organisers, attendees and speakers were all resident at the venue for the duration of the conference. This somewhat immersive setup meant we had a chance to make some new friends and have some great conversations over breakfast, lunch, dinner, and evening drinks and events – as well as the various coffee breaks during the day.

A big thanks to the speakers, attendees, organisers Dan Jenkins and Sandra Mooney, the wonderful AV team from PSP (did we mention the really cool 4K streaming?), photographer Matt Bristow – and everyone that made CommCon 2019 such a great event. We can’t wait to be a part of CommCon 2020!

All photos courtesy of @CommConUK.